Deprecated: Function create_function() is deprecated in /home/dh_e9d4c4/youthcaucusamerica.org/wp-content/plugins/revslider/includes/framework/functions-wordpress.class.php on line 515

Drug Prices: Is There A Better Way?

Drug Prices: Is There A Better Way?

Today, prescription drug expenditures account for nearly 20%  of the United States’ healthcare costs[1]. For instance, consider a college-aged woman who is a Type II Diabetic requiring insulin injections twice a day over an extended period of time. As Insulin injection costs have soared over the last four to five years, this woman’s insurance plan is not likely to take on this additional weight of increased drug prices, causing her to find herself under immense threat of having to pay out of pocket. As a result, the student would have to find a cheaper substitute for her injections, such as Metformin, which has many side effects, or DPP-4 inhibitors, which are not nearly as effective. What is even more troubling is that this substitution would likely not save her personal healthcare expenditures, given the prices for orally-administered drugs are similarly subject to price inflation as well as requiring more dosage and quantity. In essence, as drug prices continue to rapidly increase, individuals whose insurance plans are unable to cope with the costs will be left without proper treatment options.

This scenario represents an issue which millions of Americans face when attempting to receive recommended health care in the form of prescription drugs[2]. Given that Americans spend more than anyone else in the world on pharmaceuticals drugs, the healthcare system must be questioned when the last thing that stands between a sick patient and their prescribed medication is the price tag. More specifically, the puzzling motives of many of these large pharmaceutical industries need to be more closely examined.

Many diseases and patient problems require more constant dosages and prescriptions over time, totalling to higher healthcare expenditures via pharmaceuticals. This often leads to an over-reliance on generic drug brands, which are not as effective. For an individual still young and in college, these soaring prices result in a worsened state of health and much more trouble down the road.

In America’s healthcare system, free market competition amongst large pharmaceutical companies combined with little government interference creates a playing field where drugs will always be subject to exponential price increases. This becomes evident as generic brands that have protected their patents for many years will further monopolize their respective drug brands. Furthermore, these high-volume, expensive generic drugs are driving up prices greater than ever, to the point where most Americans simply cannot afford them. To prevent an exponential price increase, there are a number of avenues that the United States can take on.

Firstly, making sure these drugs are available in a timely manner is crucial to fixing this nationwide problem. Many drug companies tend to spend as much time as possible in exercising their patent rights to develop drugs. In addition, further research on how cost-effective and health-effective these developing drugs are could provide some insight into whether the extra time taken by pharmaceutical companies is necessary. Lastly, it is absolutely essential to more effectively educate patients and prescribers on these issues within the pharmaceutical industry. Most recently, the “Know the Lowest Price Act” (S.2553) was passed in 2018, which mandates that pharmacists inform patients of the best possible payment option for their prescription, even if it is out of pocket. A lack of awareness regarding this legislation by millions of Americans prevented these individuals from easily saving money on their drug expenses. Another bill known as the “Empowering Medicare Seniors to Negotiate Drug Prices Act” (S.1688), which was introduced in the Senate in the 115th Congress, would allow a health services organization to directly negotiate price discounts with drug companies[3]. More bills such as these should be advocated for as opposed to legislation that further protects the abilities of big pharmaceutical industries to control prices. The lack of progressive legislation in this arena creates a setting in which big industries outnumber the smaller, leaving them more helpless. 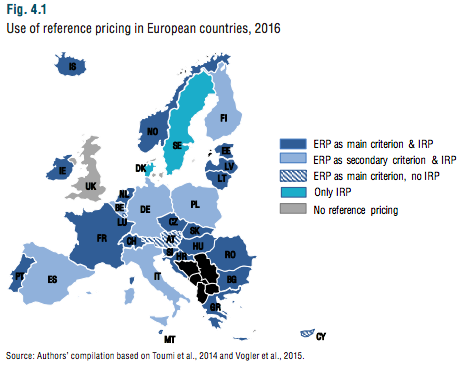 To combat the rising costs of drugs, European nations have been successful at maximizing quality while minimizing cost. For instance, consider the cost-effectiveness scale used in Great Britain[4]. This model uses the price per Quality-Adjusted-Life-Years or (QALYs) as a basis for its price points; if the price per QALYs is greater than the set threshold amount, the respective drug is limited in its use. Essentially, this means that Britain prioritizes drugs that are low-cost and high-quality by limiting higher costing drugs to emergency situations.

In France and Belgium, drug prices are negotiated to a set point that tends to reduce the final price of the prescription drug. As seen in Figure 1, nations such as Germany and Italy set their final drug prices based on the market price set by importing countries[5]. With this in mind, both Germany and Italy tend to “free ride” on the United States’ willingness to pay high prices for pharmaceuticals. This is not to say that the majority of Americans prefer these generic drugs at higher prices. Rather, most of the American public would probably be happier with cheaper and more direct pricing styles. Additionally, most of these European nations have universal healthcare systems, meaning insurance coverage and provider availability are rarely ever issues. As long as a drug is affordable, most individuals under a single-payer system would be able to easily purchase it for low prices.

Since the United States’ healthcare system is not universal, it thus cannot enjoy the same benefits with allowing free to low price prescription drugs as those European countries. However, there are reasons as to why the European system may not be as compatible in the United States. Amongst the more important ones lies the fact that the United States has to manage both federal and state level policies. This would interfere with the extent to which the universal healthcare system would apply with regulating pharmaceutical prices in the United States. Price regulations would have to be managed both by local and federal governments, causing coordination issues that European countries would not have to manage.

These systems are models that suggest that there should be an increased role by the United States government to drive down drug prices. However, there is a trade off between making sure that more people are covered, maintaining access and promoting the research and development of drugs for the future. The thing is, most of these developing drugs are inevitably more expensive and primarily affordable to those who are not as likely to suffer from an exponential price increase. Additionally, the time taken for new drugs to finally release into the market is usually a minimum of 10-12 years, bringing up the popular question: Are we willing to sacrifice greater drug access today at the expense of potentially revolutionary innovation tomorrow?

The baseline healthcare system is struggling to extend coverage for many individuals and suffers from multiple coverage gaps where, for instance, individuals earn too much to be covered by Medicaid but earn too little to be covered by supplemental insurance. This gap is increasing ever so largely and continues to be an unacceptable threat to those who need improved life-saving medication. We can begin to address this issue by understanding that this problem affects every single one of us. With pharma prices set to rise by an additional 6.3% by the end of this year, more and more individuals, many of which are college-aged, will be stripped of the right to access proper healthcare in the form of necessary pharmaceuticals. Spreading the word on this issue through social media is a good start, in addition to emphasizing the urgent nature of the issue. This can be done through contacting different philanthropy groups on campuses and raising money to help reduce out of pocket costs for individuals unable to keep up with the rising pharmaceutical prices.

To address this problem at the macro policy level, policy makers should use European models as templates. This cost effectiveness scale used by Britain can be potentially be applied at a state level where, to begin with, each state utilizes some sort of regulatory mechanism to promote higher quality pharmaceuticals. To prevent rising costs of generic drugs, the United States may look to set its prices based on the set-price method that most of Europe uses. This will reduce the burden that many European countries place on the United States in free riding its willingness to pay higher prices. This is easier said than done, however, as seen by the Obama administration’s failure to advance a similar plan in 2016 due to pressure from pharmaceutical companies, doctors and patients[6].

With this in mind, it may be vital for the United States to develop cost-effectiveness scales for different classes of drugs and begin to use the European methods to “set” prices of generic drugs to market level. Lastly, it may become inevitable to push for a universal healthcare system that guarantees prescription drug coverage for all. Otherwise, patients will be forced to navigate the wide-ranging multiple payer systems available in the current market, resulting in prescription and generic drug prices continuing to rise beyond what patients and providers can afford. In the long run, a push for competition in the pharmaceutical industry as well as reform in how individuals are covered by their respective insurance companies would likely make drastic improvements.